After a huge lead up to the opening ‘bargain’, I bought in - to ‘Typesy Teaches Operating Systems’.

I started with the macOS tutorials and they were exactly what I expected. Basic macOS navigation and use. There are, however, a few little hints and tricks that could prove useful. I’m looking forward to getting into some more advanced topics, to see if there really is good value here.

It’s an extremely DEEP dive into downloading and installing virtual box elements that allow you to install Windows Server and a separate Windows 10 install, for what I can only assume is some kind of long-range plan to finally get to the operating system…? Go to this website, download this, install that…

I’m up to lecture 4, and we’re still to cover even the most basic and fundamental Windows navigation and use. These courses are chalk and cheese!..

I don’t understand, why the macOS tutorials start out with what amounts to, “this is a mouse, point here to open a Finder”… whereas the Windows tutorials jump straight into “download and install Virtual Box, download Windows 10 Pro, Windows 2016 Server edition, do this, point here, download and install that, make sure you don’t do this, do that… etc, etc…” and we haven’t even talked about even the most fundamental Windows tasks??? I don’t get it?

I’ve sent an email to ‘support’ but so far, no one has come back to me about it.

What do others think about Typesy Teaches Operating Systems??

Wow… 2 weeks and not a single reply…
I guess I’m the only ‘sucker’ that bought into this Typesy ‘hype’… this course is a ‘dud’… Not happy with the money I spent on this, at all.

I have yet to see this new course, but perhaps there are system requirements for the program, and it forces you to update if your device isn’t up to speed? It’s the only reason I can think of for having to download/install so many things right off the bat.

Have you continued on the Mac version? Interested how in depth that one goes, since I for one would actually appreciate a more in depth guide!

The ‘Mac Course’ is a fairly comprehensive ‘rudimentary’ course. I can see how someone opening a Mac for the first time, could get some value out of it. Having said that, there were still a few little ‘quirky’ things that made me think about how I do things. For example, I toyed with multiple desktops for a bit. Multiple desktops do have advantages… but, I’m not completely sold on it. Also, I’ve always been aware of split-screen… this course reminded me, and I’ve used that a bit more lately. Also, I’d never bothered with formatting disks as APFS which is claimed to be ‘faster’… I’ve re-formatted a drive that way… nothing spectacular. He also references Catalina… and I’m still on Mojave… so there were a few things that don’t work for me.

But overall, there really isn’t that much to the Mac course in really ‘Ahhhhhh Haaaa’ moments. Even towards the end. It doesn’t get into the nitty-gritty at all in my opinion. To be honest, it’s a little disappointing. Not only that… at the risk of sounding a little ‘red neck’… the guy who instructs the course, speaks English as a 2nd language… so, there are often instances, where it’s difficult to follow what he means… he talks in ‘weird’ nuances… “these are the one”… and quite a few grammatical slip-ups that sometimes have you guessing exactly what he means. And the accent is pronounced. It just adds another layer of uncertainty to the lectures.

In contrast, the Windows course is like diving off a cliff… you’re taken straight into a world of, “go here, download this, install that, do this, do that… check this, run this…”… I’d followed along and before I even knew it, I’d installed Windows Server 2016 edition some kind of ‘Virtual Box’… and I totally lost interest after that. I’ve stopped watching it… I don’t see the point? Even though there is an introduction and he talks about “what we’ll do”… you’re led down a severely complex path… and I’ve yet to see any beneficial use from it at all… I have all of this stuff installed on my Windows computer, and I don’t know how to ‘safely’ un-install’ it… It’s the very reason I got OUT of Windows in the first place. So many pitfalls for just uninstalling the wrong file. It felt like I was madly installing things for… what? I still don’t know. And I consider myself a ‘reasonable’ Windows user. I have 2 x Win 10 Pro machines and have created remote profiles for them on the home network, such that I can power them on remotely, and use them via Remote Desktop from my Mac…

In contrast… It’s almost like the Mac course is ‘kindergarten’ and the Windows course is University Level algebra… they are completely chalk & cheese. I’ve tried to address this with support, but it appears that ‘support’ in Typesy is run by ‘do-good’ volunteers and not people from the company?

This course is designed to provide students with the knowledge and skills required to support and troubleshoot Windows 10 in a Windows Server domain environment. These skills include understanding Windows 10 features, how they can be used in an Active Directory environment, and how to troubleshoot them.

The features of Windows 10 Pro will be available in the last 3 courses. 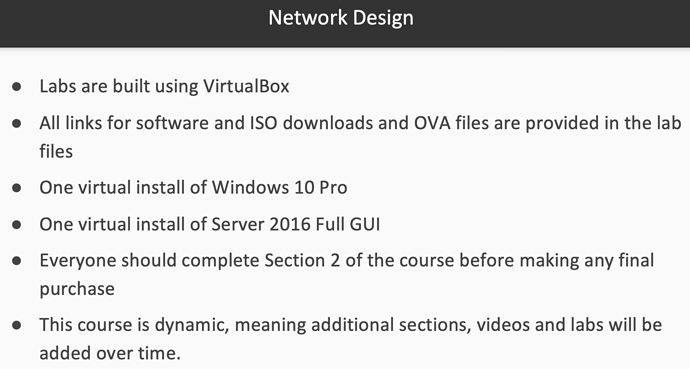 At the very least… I thought the Windows version would be ‘on-par’ with the Mac version… showing the fundamentals of getting around the software and some tips and tricks.

But the Windows course is like giving a kid a scalpel and walking him into an operating theatre and saying, “here ya go kid, you’re the brain surgeon today”…

The Windows course instructor calls himself… “Professor K”… so, that’s the level you’re taken to, straight out of the box.

I bought into the Typesy Teaches Operating System at the very beginning of the promotion and got what I ‘think’ was a very good price?.. (so they kept telling me)… but, this side of it… I’d say it’s worth ‘maybe’ $10 USD?.. to me… Maybe if you’re a Windows/Cisco certified CCNA network engineer… it might be of some value?